Writing this story I couldn't remember the name of the man that we did the session for but I have included his picture and I was not going to release his name but I had a feeling he had passed over so I asked Marti to see if she could locate him for me which she did.  It appears that he died 11th June 2011.  Perhaps that's why I had to wait to write this story.  His name was Lightning Bear.


Marti and I were at a science fiction and horror convention once.  It was interesting, but we were unsure if this was the kind of place where, what we do would go over very well, but our friend Dave Schrader who was going, thought it would work out for us.  The event did work out well for us. While we were there we did a session for Kane Hodder who played Jason several times in the horror movies. (He told us we freaked him out!).  There was also another interesting connection that took place.  There was bit of free time and a chance to look around the event and as I did,  I was drawn over to a guy sitting at a booth who had been a stunt man in numerous movies he was an older man tall with a long pony tail he had been one of the storm trooper bike riders in the movie Star Wars.  As I talked with him I felt sad and sorry for him.  I told him that I was a Medium and if he would like to come over and have a session with us he was welcome to.  Later on in the day I was just finishing a session and looked up to see the guy I had been talking with earlier.  "So do you want to do this?"  I asked, he nodded and quietly sat down with us.  The first spirit to speak to him was a native american Indian.  I heard the Indian tell me his first name Black but I couldn't hear his last name.
"He's known as Black something" I said
"Black Elk! is my grandfather."  The man responded
Now this is the strange part because I know who Black Elk is.  He is a very famous american Indian and I have had his book for 35 years and read it a few times, but for reason, which I will explain at the end, Black Elk kept me from comprehending who he was.  The session continued the grandfather talking to his grandson and giving him some very personal advice obviously aware of some of the difficulties his grandson had been and was having.  Then another Indian made his presence felt he told me he had met one of the American Presidents.  The man sitting with us told me he was a famous Indian and he was his great grandfather that he had known. I can't remember his name now but the Great grandfather spoke to him as well. when we finished it suddenly dawned on me who I had been speaking with.  I understood then why Black Elk had not let me realize 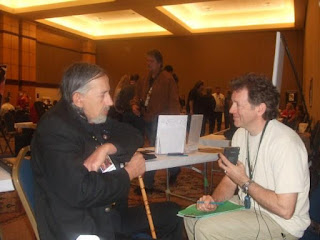 who he was.  Black Elk was just the grandfather and this was his grandson and they were having an intimate conversation so it didn't matter that I didn't know who he was exactly.
Posted by MysticMike at 5:59 PM No comments: